The BeamMP mod in the mod section of BeamNG is showing that it is unpacked and whenever I join a server it comes up with an error that says BeamMP must be packed before update. I join the server and the UI apps that BeamMP shows such as player list and ping do not show, as well as player movements (players stuck in the same position). When I try to pack it from the mod section it just doesn’t pack. 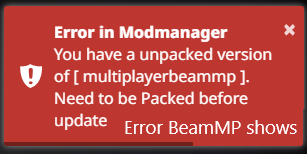 I have same issue. beammp mod shows up as unpacked but in folders there’s nothing in “unpacked”

I think I fixed the issue by running the BeamMP launcher as an administrator.

literally this is all i get no matter the server just constant errors i cant even get into anything and the game immediatly crashes when joining a server.