So, lately my game just starts to lag, like, A LOT, I start earing some audio cracking and it just gets worst until it is literally unplayable, this only happens on BeamMP, I only play on one server, its called CaMP and I only join Italy with 10 player. I have a i5-10600k, 32gb ram and a rtx 2060. Hope someone can help me with this.

Hi! I have the same issue. After a little research, I’ve come to the conclusion that it’s caused by BeamMP (they need to update something). In fact, the reason I came here to this forum is to see if anyone has realised that and reported it, so that the BeamMP dev team fixes it, and if not, I will be the one to report it.

Your (our) issue arised in BeamNG’s 0.24 update (or one of the next smaller updates that are part of 0.24). I don’t know what the BeamNG dev team changed, but either they messed up something, or BeamMP needs to get up-to-date with the newest BeamNG version.

I found this listed in BeamNG’s official known issues list: 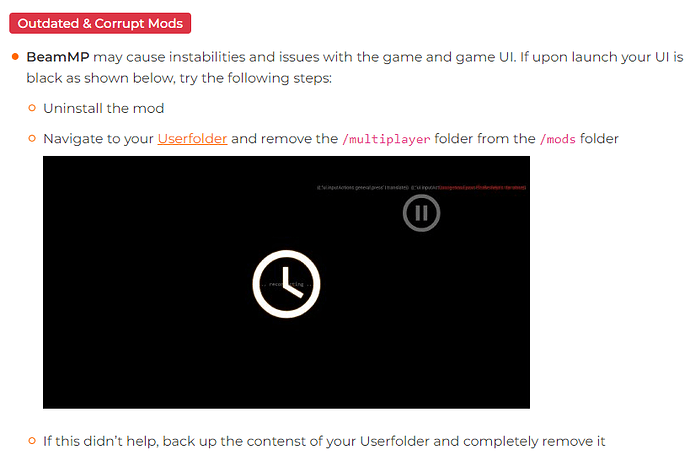 I also was just about to report these issues to BeamNG dev team, but their instructions stated I should first see if the issue persists in Safe Mode; I ran the game in that mode, played in singleplayer (can’t use mods in safe mode) and it was all gone, the game ran butter smooth! In fact, I don’t even need to run it in safe mode, as long as I play singleplayer, it’s fine. Issue arises only in BeamMP.

So far, I’m unaware if there’s anything we can do to temporarily fix this. In my opinion, we can’t do anything, besides wait (hope) for one of both teams (or maybe both) to do something about it.

Hi,
This is not a BeamMP issue, please refer to the threads below. The BeamNG dev team are looking into this. I appreciate the time and effort you put into the report above, i’m just sorry it’s not something we can act on.

These are the threads on the BeamNG forums relating to the issue. Apparently the BeamNG devs are looking into this, but not much information being shared as to what exactly is causing the issue.

Supposedly at random the Ingame SFX breaks and causes the game to stutter and audio to cut out. I have seen others have the same issue which might…

Please note the one below has an inaccurate title, but the rest of the thread is related.

So, was playing the game today, and was messing around with some levels, and completely out of the blue, FPS just slowly starts decreasing, along with…