Simple request with obvious reasoning, either disable the ability to make edits to your vehicles or add an option in the setting to turn off other players edits being received. Vehicle changes will still be received.

I do not care at all about the other 9 players sitting in multiplayer not moving, trying to build a car that will never be better than the stock ones or even anywhere near drivable, I rarely see people that can drive anyway. Them having control over pausing my game when I stop is irritating and unavoidable unless I delete everyone.

Very few players actually know how to make a car that is set up correctly, the ones that don’t, are just incorrectly playing car building simulator, which they can do in single player. I can run 10 vehicles nicely, but when 5 or 6 are sitting around making 40 EPM (edits per minute), it is much less fun and creates another acronym to google.

Auto apply in part selector, that is another option that should be disabled by default for ALL multiplayer servers, no, REMOVED completely as an option just for multiplayer.

Obviously some servers need to allow edits, CaRP has to allow it. I’m saying disable edits on ALL official servers and add it as an option for players and server owners to easily toggle on/off.

If you do not feel the same way, then you probably haven’t been playing long enough, are using an amazingly expensive and powerful computer, or you are one of those people that join multiplayer and spend most of your time not moving making edits. GO BACK TO WHERE YOU BELONG, in single player.

This already exists, it has for at least 6-8 months at this point.

It is called “Automatic Queueing System”. If enabled, remote vehicle spawns and edit will be put in a queue, instead of applying instantly.

This feature used to be enabled automatically, but people were confused by it and had issues with edit not queueing because they didnt understand the feature. So we disabled it by default and you have to enable it to get a queueing system for all spawns and edits.

HOW TO ENABLE
-Click on Options > Multiplayer > Show Advanced Options 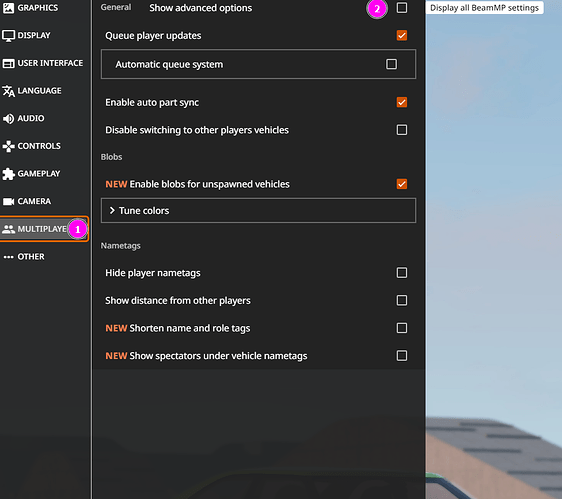 -Clicking on “Automatic Queueing System” will automatically load the edits and spawns when you are at a complete stop.

No. Look at the 5th line “Them having control over pausing my game when I STOP is irritating and unavoidable unless I delete everyone.”

Not the solution at all, obviously I went straight to the settings. I hope you didn’t miss the part where I mentioned an option to stop receiving edits which you didn’t mention at all. This is not solved, queuing edits just swaps intermittent short pauses for long pauses when you stop.

Automatic queuing is enabled by default and queuing a large amount of edits is creating even greater waiting times when I stop. When I have 2/8 up top of the screen I know when I stop, the game pauses for a long time because of the amount of edits queued. similar to turning on traffic in single player.

What I am asking for is the option to NOT RECEIVE EDITS, but still receive spawns and vehicle changes(when a player changes to another vehicle).

Thanks if someone reads and not responds with a template, without even reading.

I’ve just thought of a possible solution, the multiplayer UI app that displays nunber of players, ping and the quit button could have a button on the left, opposite quit that loads edits when the player wants. A manually load edits button.

A lot of multiplayer is ruined by edit lag, I really REALLY want a solution that doesn’t ruin it in a different way.

We can work on separating player edits from spawns, but if you cared to read the description of each option the Automatic Queueing System has, then you would know that you can queue all edits and spawns and ONLY laod them in when you press the orange button at the top of the screen in the “quit” UI app.

I will see if it is possible to make it so you can either queue player edits, player spawns, and both, but this is already a working feature.

So it is already a thing, the countless people I have asked and myself didn’t know or realise it already exists, dam fools we are. literally everyone complains about the edit lag, the problem is just auto que system. Would like vehicle changes without edits but hey, massive improvement to cops and robbers, rock crawling, crashing, everything.

Next up is making sure that we learn that bit of info before edits annoy us too much, I’ll tell people for sure. Maybe some quick tips that are impossible to ignore. Custom menu/loading screen?

Thanks for making it clearer.

Separating player spawns from player edits is in the dev chat now. I will update you if it is possible/being worked on